PREPARATION AND ASSEMBLY OF THE WHEEL CLEANING SYSTEM 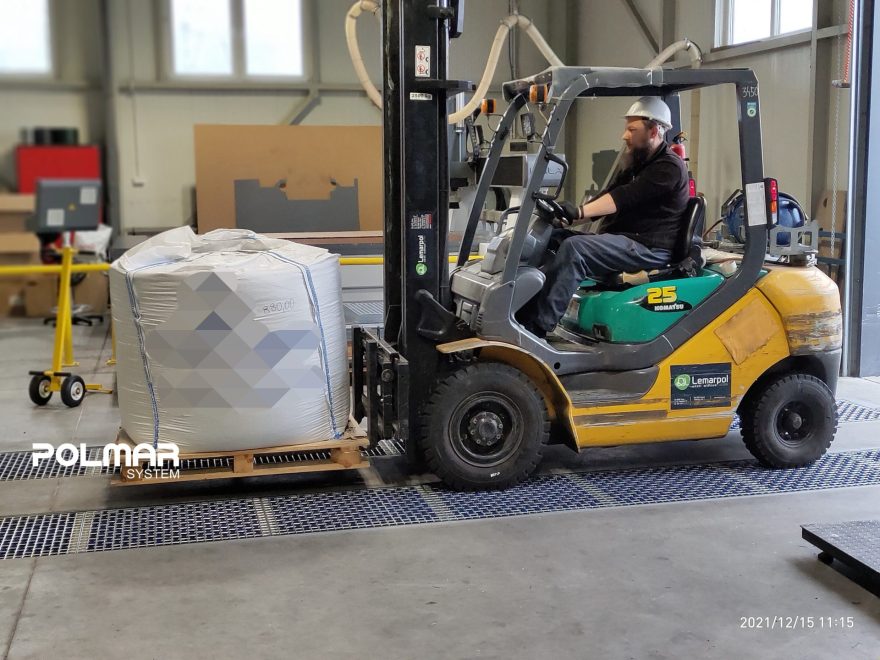 In 2021, the reorganisation of the production and storage halls began at Polmar Profil – the owner of the Polmar System brand of grating with brushes for cleaning vehicle wheels.
As a result of the changes, the communication routes began to be used more intensively. This necessitated the application of new procedures related to the maintenance of cleanliness in industrial facilities. 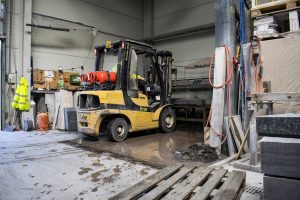 Contamination on the production and storage hall

Maintaining order and tidiness became a new standard and a certain obligation to be fulfilled in the long term. As with any new process, the internal logistics were described with procedures and analysed.

It was found that the amount of dirt entering the buildings had to be reduced. The dirt had a direct impact on the quality of the products. The company mainly uses two polymer processing technologies – extrusion and injection moulding.

The quality of the product and its aesthetics must meet high standards, so cleanliness zones were set up in these areas. The overriding aim was to reduce the number of product defects caused by contamination and to optimise cleaning costs.

One of the tasks that led us to this goal was to install a special system for cleaning the wheels of vehicles – forklifts, electric forklifts for high storage and pallet trucks.

A recessed floor system was chosen. A special design of the system was required, with two driving tracks.
The system itself was laid asymmetrically concerning the entrance to the hall.

The length of the system was estimated based on the wheel diameters of the largest vehicles and the assumption that a wheel should turn on it at least 3 times. The system was then guaranteed to collect up to 90% of the dirt from the wheels. 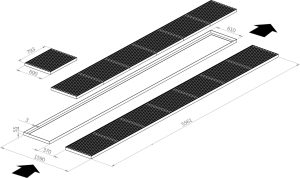 Once the design of the system was approved, implementation began.

The first step was to prepare the slotted frame from a 50×50 angle section. The angle bar has mounting holes for anchors. Its elements were initially positioned on the floor, then numbered and finally galvanised. 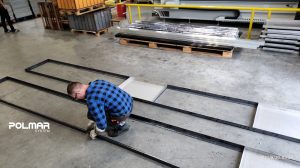 Measuring the area for the vehicle wheel cleaning system.

The area to be covered by the system was colour-marked on the existing floor.
The surroundings of the entrance, especially machinery and storage areas, were secured. The preparation and installation of the system were carried out in a way that does not interfere with normal operations, without unnecessarily excluding passageways from use. 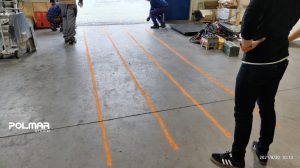 Marking the surface before milling

After milling, all debris and dust were removed and the floor was cleaned. 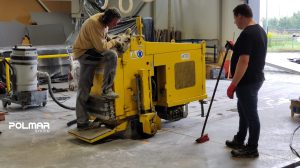 The mortar frame was re-mounted and the amount of mortar required to finish the surface and fill any irregularities was estimated.
Bonoflow 200 TP 0-0.3 single component, high compressive strength mortar was used. 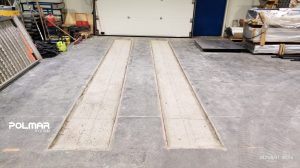 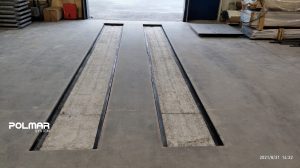 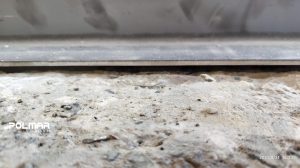 Estimation of quantity of mass to be finished

The edges of the system were painted with special floor paint to give the recessed grating system its final appearance. 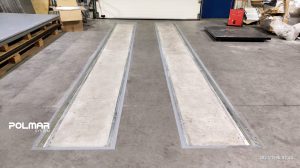 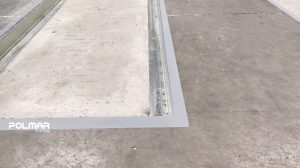 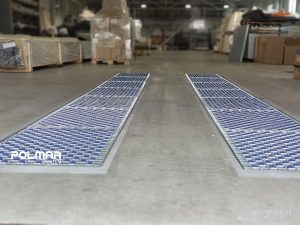 System for cleaning vehicle wheels after installation in a gully

The complete system consists of 14 gratings, 7 per track.
The gratings are fitted with straight brushes in a chequered pattern.

The use of this system was forced by the nature of the dirt and the possibility of bringing slush into the hall. It was important that the cleaning brushes fulfilled their task but also that water and dirt fell quickly into the dirt collection zone. The water should be able to evaporate quickly. 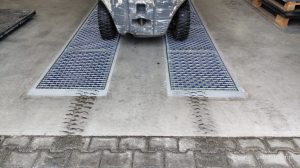 The system is cleaned once a week. Its operation is limited to vacuuming or washing, e.g. with a pressure washer.

After two months of operation, we can see that the amount of dirt in the area of the storage halls has significantly decreased. We have to clean the hall surfaces less frequently. The amount of inclusions in the finished products has also decreased.

As a result, we can produce high-quality, coloured protective boards for walls and industrial packaging elements.

If you want to achieve similar goals, we invite you to contact us. We will design and manufacture a system that best meets your expectations.

We invite you to contact us by phone, make enquiries using the form or shop directly in our online shop.